If you were to be accepted into the elite order known as the cuauhtlocelotl, you would be in essence a full time warrior for the Aztec society. Benefits and rewards were commonplace, and the Aztec Eagle and Jaguar warriors were highly revered in Aztec society.

The Eagle and Jaguar warriors were hard to miss on the battlefield, their attire and style reflected their name. From the Florentine codex we can see depictions of both classes of warrior wearing intricate suits and head dresses that bring the animals to life, but its unlikely the war suits of these warriors were designed to offer any advantage in battle. It’s thought that the warriors would have worn the same body armour protection as other warriors of their rank for protection underneath. One thing is for sure, their unique war suits would have made the enemy think twice before charging into battle with these mighty Aztecs.

Becoming an Eagle or Jaguar Warrior

Entry into these elite military orders were no easy feat, an Aztec warrior, noble or otherwise would still have to prove themselves worthy before they would be accepted to the ranks of the cuauhtlocelotl. Due to the militaristic nature of the Aztec society of course the feats were war focused.

Historians have stated that to become a Jaguar or Eagle warrior, one would have to capture twelve or more sacrifices in two consecutive battles. This is of course a large task for any warrior and thus ensured that only the best warriors would be accepted to this esteemed military order.

The Aztec eagle warrior, or cuacuauhtin in classical Nahuatl, were as we know a revered order or class of warrior in the Aztec military. Adorned in feathers, with clothing and shrouds for the head, what mimic the visage of their namesake, the Eagle warriors were surely a splendour to behold.

The Jaguar warrior, known as an ocēlōtl in classical Nahuatl, were the sister order to the Eagle warriors and some of he most elite warriors in the Aztec army. Their style and uniform was based on the Jaguar itself, with the warrior being dressed in animals skins, and a helmet or shroud that resembled the head of a jaguar. 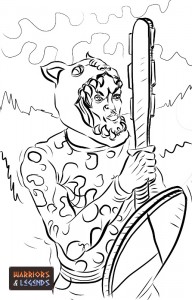 An Aztec jaguar warrior known as an ocelotl in classical Nahuatl.

The use of the Aztec Eagle and Jaguar warriors in battle

Due to their experience on the battlefield and their bravery, its likely the Eagle and Jaguar warriors were placed at the fore of the pack. The mere sight of these warriors by the enemy would have added a psychological edge to the Aztecs.

Nobility and commoners in the Aztec Eagle and Jaguar warrior order

Joining the order of the cuauhtlocelotl the Eagle Jaguar warriors, was open to both Aztec commoners and nobles, giving equal opportunity to all who were worthy. Joining however as we mentioned earlier required feats of bravery and skill in battle, and being accepted to this particular order was not easy.

It’s thought by many historians that this like many or the high ranking Aztec orders, was mostly populated by the noble Aztecs. But what we do know is that commoners did join the cuauhtlocelotl, and reaped similar benefits as the noble folk.

The benefits of being an Eagle or Jaguar warrior

To join the ranks of the mighty Eagle and Jaguar warriors was a difficult feat, but for those that did, the benefits were plentiful. Joining the cuauhtlocelotl ranks, was not only a social step up, but also offered tangible benefits.

The cuauhtlocelotl could wear fancy clothing and jewellery that were not available to everyone, like wearing sandals in royal areas, and to even wear military clothing in normal society. They were also allowed to dine in the Aztec royal palace, and feast on human flesh should they desire. Additional benefits included the option of concubines, additional relationship outside of their normal marriage and the reward of being able to drink in public should one choose.

The cuauhtlocelotl – The Eagle and Jaguar warriors in summary