To become a ninja was no simple feat, many skills would have to be learned and mastered before one could truly be capable. These skills were either passed on from family to family, or at one of the famed ninja ryos. Whichever way you learned, becoming a ninja required hours of training and practise to hone those skills that would carry you safely through your many missions.

The skills that the ninja would learn, all fell under the umbrella of the way of the ninja, better known as ninjutsu. Ninjutsu came into the world from an amalgamation of many martial arts and beliefs, and was first founded by Daisuke Togakure and taught at his school the Togakure-ryu.

The 18 skills of Ninjutsu

For a ninja to be effective it was taught that they needed to be aware of themselves, and this was achieved via Seishin teki kyoyo, the spiritual refinement of the ninja. The basic fundamental of this spiritual refinement was to be in the moment at all times, without anything clouding their mind the Ninja would be able to perform effectively. The breakdown of the Seishin teki kyoyo had seven elements which we will list below.

Self knowing – Knowing oneself, motivations, needs and understanding
Knowledge of nature – This effectively was a knowing and knowledge of reality
The calling – Understanding destiny
Harmony – To be like still water on a river bank
The heart – To be able to understand, to have empathy
The eye – To see clearly
Love – Love for oneself and others

The skill of Tai Jutsu was the talent of fighting with no weapons. This would likely not be the ninja’s first choice, weapons offered considerable advantages but if needed the ninja could fight unarmed. The various discliples of Tai Jutsu existed which we will detail below:

All these skill came together to give the ninja skill to work in any situation of unarmed combat.

Kenjutsu was the skill of swordsmanship, and for the ninja this was an integral weapon. This particular art was originally a samurai taught skill, and like many other japanese arts incorporated sparring and also single practise of various common motions called kata’s.

Bojutsu is literally the art of using a bo, a staff, and translated means staff technique. The ninja would learn bojutsu, focusing on the staff as an extension of their body, and the bo was capable of being used with many attacking and defending motions. 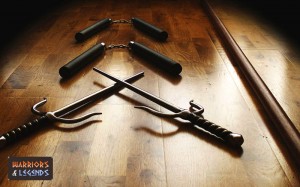 The ninja were skilled in many arts, including the use of various weapons like the nunchucks and bo staffs.

Shurikenjutsu was the ninja art of throwing blades that covered many types of shuriken. The translations of shuriken is literally ‘hidden hand blade’ and the art of shurikenjitsu involved the technique of holding, concealing and throwing the blades.

Yari is the japanese for spear and of course yarijutsu(sometimes known as Sojutsu) is the ninja art of spear fighting. One of the most common weapons used by the ninja the spear came in many forms and was used not only as a weapon but also to vault over walls and fences. The ninja would train with various forms of yari including the following.

Naginatajutsu was the martial art of wielding the naginata. The naginata was a bladed sword placed on the end of a staff, and was a unique weapon of its time, but would be classified as a pole-arm weapon. The naginata and its art were popular for the range offered by its weapon and many movements and actions were of course similar to many of the other weapon arts.

Kusarigamajutsu was the martial art of the using the ninja weapon the Kusarigama. The Kusarigama was a chain and sickle weapon, that is often associated with ninjas and ninjitsu. It was common for ninja to carry two Kusarigama and would be able to be used as a close range handled weapon, or even swing the sickle using the chains and extend the range of the weapon considerably. Through the art of Kusarigamajutsu, the ninja would learn to master the benefits of the Kusarigama.

Kayaku-jutsu was the ninja art of using firearms, gunpowder and explosives. The ninja were capable of utilising this skill in both defence and offensive forms, whether to hurt or injure their foes, or to simply distract while entering or to distract while escaping.

Closely tied with Choho, Henso-jutsu was the ninja techniques of disguises and impersonation. In some training clans it would be known as the ‘seven ways of going’, which mean the ninja would use disguise to impersonate one of seven people. These seven people were a monk, a samurai, a merchant, a craftsmen, a farmer, a performer or even a normal person.

The key to the ninja being successful in Henso-jutsu was the use of costume and acting, and it’s thought that many ninja undergoing a spy or espionage mission would carry at least two costumes.

The skill of shinobi-iri meant ‘to sneak into’ and was the ninja art of stealth, entering and climbing. This skill was synonymous with the ninja, and to become adapt at chinboi-iri was key to a ninja’s success. There was five common methods usually employed by a ninja when practising Shinobi-iri, which we will detail below.

With these five skills, the ninja was able to choose the correct moment, apply it to the weak point, and if necessary conceal their noise levels while distracting any guards.

A ninja warrior using a rope to climb.

Bajutsu was the ninja art of horsemanship and covered a range of skills to be practised and mastered. Proficiency in horse riding was the first, with mounted combat secondary. The care and upkeep of the horses was also included in Bajutsu and it was even common to learn techniques one could teach their horse, like how to manage their reactions to certain situations.

As part of the many tasks and mission it was common for the ninja to have to overcome elements, and in particular water. Sui-ren was the training of water skills, allowing the ninja to utilise the many water crossing tools. Also sui-ren would teach the ninja how to use water to hide, conceal themselves and also how to cross water effectively in a stealthy manner fitting for a ninja hoping to remain unnoticed.

The strategy of the ninja included training in both traditional(orthodox) and non-traditional(unorthodox) methods. Bo-ryaku covered basics such at facing and defeating an opponent, and then to defeat many foes at once. Bo-ryaku went even further dealing with large groups, overarching themes like politics and the manipulation of current events and even situations.

Choho was the ninja skill of espionage, essential to learn and useful in many of the common tasks performed by the ninja. The varied components of Choho involved being able to answer questions in the correct manner, to say the right words, and gain the confidence of anyone you needed.

Inton-jutsu was the ninja art of escape, concealment and disappearing. This meant that should the ninja need to quickly back away, they could do so with speed and success, and included the art of shinobi aruki, the stealth walking technique of the ninja.

The ninja were keen to take advantage of every possible situation they could, and Ten-mon, the study of seasonal weather patterns and formations was another important consideration for the ninja. It was common for the ninja to understand not only the basics of meteorology but subtle nuances and changes in the weather that they could use to their advantage.

Key to any strategic mission, from a long term espionage of spy mission, to a short term household raid, the Ninja needed to know the geography of the immediate landscape and even further afield.

The Ninja warrior skills in summary

These 18 skills were a mix of mental, spiritual, physical and knowledge. This mix of skills provided the ninja with a solid foundation in non only a mix of deadly combat skills but also the mental strength and calmness to use them effectively in all situations. In the hands of a less disciplined individual the lethal combat skills of a ninja could be a cause for general concern, but the mental strength and zen approach of the ninja mean’t they were highly capable of choosing when the use of force or retreat was necessary.