To be a famous gladiator could mean money, freedom, popularity and more. Many successful gladiators names were known throughout the Roman empire and much further, such was the power of being a successful warrior. To win in the Colosseum could raise your profile to that of a ancient superstar, revered and held in high esteem by men and women alike.

The most famous gladiator of them all, Spartacus has a name that was popular in ancient times, and also in modern times, with his story being told and retold throughout the ages. Spartacus himself started life as a Thracian soldier who in battle was captured and then sold, to a man called Lentuluas Batiatus. Despite being captured Spartacus was a strong, powerful and skilled man who had a natural affinity towards fighting and leadership.

In the amphitheatre Spartacus played the role of a Murmillo gladiator, he was considered a heavyweight gladiator, big and strong, although the actual history of his fights is not well documented, we can presume that we won the majority of them due to the fact he survived to lead a revolt. 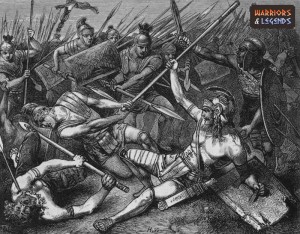 Spartacus fighting to his death against the Roman army.

It was in 73 BC that Spartacus finally fought back against his captor, leading a famous revolt with his trusted gladiator allies which resulted in the death of his then owner, Lentulus Batiatus. Once free Spartacus and the gladiators escaped to Mount Vesuvius and along the way looked to free everyone they could that was enslaved in any way in the Roman Empire.

Due to these actions Spartacus was a powerful man that commanded the respect of all, he had soon amassed a huge army of around 70,000 slaves which made his one of the most powerful men in ancient Rome.

Spartacus led many successful battles against Roman soldiers trying to stem the revolt, and it was four years after his escape that he finally fell. The reported battle where Spartacus lost his life took place in 71 BC, but Spartacus’s legacy has stood the test of time, still existing to this day.

Not much is known about this mysterious gladiator, but his fame still exists, with his name etched on glass vessels found in the countries that are now France, Hungary and England. His fame exists from battles with another gladiator Prudes who is also mentioned on the vessels. Tetraites won this battle and it must have been a noteworthy fight as it is this that really propelled Tetraites to fame as a gladiator. 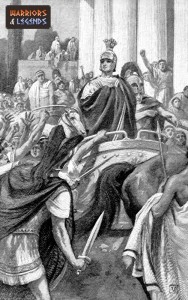 One of the many freemen who became a gladiator out of choice rather than slavery. Marcus Atilius was a Roman citizen who managed to rack up debts from which he had no other means of escape. Atilius was featured in a Roman graffiti which tells us of two of his battles, both of which he was the successor even when faced with two veteran and successful gladiators. Perhaps his defeat of Hilarius, and L Raecius Felix was enough for Marcus Atilius to clear his debt and return to his life as a Roman citizen, perhaps with a few scars as a bonus.

Spiculus was a gladiator who found immense fame and notoriety in the 1st century AD. This gladiator was able to win many battles in the amphitheatre and this did not go unnoticed. Spiculus built a close relationship with the then emperor Nero who in awe of Spiculus bravery and fighting ability awarded him with riches and rewards. When Nero found his power was gone, and he was overthrown as emperor around 68 AD his choice was to have Spiculus end his life, however Spiculus was not to be found and Nero did in-fact take his own life. *Needs more editing to be more different

Crixus a famous gladiator in his own right, he was also the right hand man of Spartacus, and was involved in the Gladiator war, also known as the third servile war and was the last of a slave rebellion against the roman empire.

It was in 73 B.C when Crixus and Spartacus along with around seventy other gladiators made their escape from the school in Capua, which was owned by Lentulus Batiatus. They ended up with a reported 150,000 slaves joining in their revolt, but Crixus and Spartacus got separated, leading to a battle with the Roman army in which Crixus died.

One of the toughest gladiators Flamma was a truly capable gladiator, who fought an astounding thirty four times, and winning an impressive twenty one times, drawing nine times and only losing four times. Flamma was original from Syria, and lived for the fight, he thrived on the battle and this spirit helped keep him alive until his thirtieth birthday. His name is literally translated to The Flame and he bore it for 13 years while fighting.

Before he took to fighting in the Arena, Flamma was a soldier in the Syrian army, and this profession probably served him well. After being captured he was condemned, and forced to fight in what would become a sport he excelled at.

Flamma was offered the Rudis many times, a wooden dagger that symbolised his freedom, although Flamma never made good on this offer, instead choosing to fight to his death. 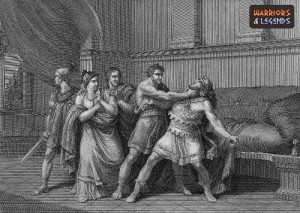 Commodus, a somewhat gladiator and emperor here being strangled.

Commodus was a roman emperor who liked to fight in the arena with gladiators, typically in unfair match ups however. This emperor had a huge ego and widely considered himself to be quite the warrior, however as we mentioned, his match ups were wholly one sided. His opponents were often armed with wooden weapons or even physically disabled or crippled perhaps from birth or other injuries in the amphitheatres, making the matches largely unfair. His actions in the amphitheatres make something of a mockery of the gladiator games and it is believed for this, Commodus was widely unpopular, with many believing this actually contributed to his assassination.

While the certainty of some form of female gladiators is likely true, Mevia is actually a famous female gladiator, but perhaps not for all the right reasons. Mevia was though to be a female who while not technically a gladiator but more of a venatore as she fought animals rather than other people. Its thought that Mevia was likely a foreign slave who had an aptitude for battling animals and is reported to have fought with a spear while also topless. Mevia was somewhat famous for this and there are even sculptures of her in action.

Not a gladiator persay, but a bestarii, this fighter was pitted against animals but this makes his no less legendary and deserving to be on this list. As a bestarii Carpophorus is reported to have been involved in the inauguration of the Flavian amphitheatre and put on quite the show! Carpophorus performance here is thought to be the stuff of legends, having pitted himself against two big cats, in a lion and leopard, a bear, and a rhinoceros among others. Legends say Carpophours killed around 20 animals in this day, marking his as a fan favourite and something of a legend among the spectators at the Flavian initiation.

These two gladiators are famed for their epic battle in the first century AD. These two warriors faced off in the Flavian Amphitheatre, and neither gladiator could get the upper hand in the fight. This led to a drawn out and extended battle where the two evenly matched gladiators fought for what is told to be hours, with no clear winner. In the end our of respect and exhaustion these two fighter put their arms down at the same time. The crowd appreciating the gutsy battle they had just seen roared in approval, and the emperor of the time Titus awarded both men with the rudis. This is a wooden sword that signifies a gladiators freedom, and with this both Priscus and Verus were able to leave the flavian amphitheatre as free men and no longer gladiators. *Needs more editing to be more different

With so many great gladiators from the Roman era, however there are still so many we do not know about or whose battles were not recorded for the history books. With often hundreds of gladiators fighting at an event, it would have been hard for a gladiator to make their mark on history, but many mentioned here were truly deserving of their fame.