Warriors and Legends > Gladiators > Timeline of the Gladiators

Timeline of the Gladiators

While the history of the gladiators of Rome is intriguing and unique, it’s also got so many key moments that’s its hard to keep track of everything that went on. To help we have created a simple time line of the Roman gladiators, highlighting the key events and records from this unique period. We have also added in some other time lines regarding Rome to help you tie these events into the wider history of Rome, and make it clearer to see the great importance that gladiators had in the overall history of Rome. 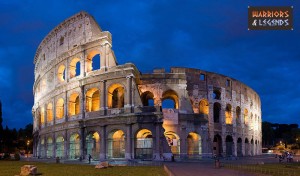 The Colosseum of Rome, the empires greatest amphitheater was also a critical point in the timeline of the gladiators.

It’s quite clear to see that the time line of Rome is littered with references to the gladiators. From the first gladiator battles use to honour the dead, to the building of the mighty Colosseum in Rome. This form of gladiatorial entertainment had a large effect on Roman society and the time line of this mighty empire.